January 23, 2017
Are age old traditions always a social evil or do they carry some hidden message ?

Born in a country with vivid cultures and 23 constitutionally recognized languages you will find a different tradition every 50 mile you travel. But one intriguing question is whether these traditions were merely introduced for fun or do they have some deeper message. During the early 1800 there have been multiple peoples movement that aimed at abolishing few of these traditions as it was more considered as blind beliefs. Mostly fueled by western influence that knew that our culture is our identity and in order to defeat us these traditions have to be demolished. This continued into 1900 as it united people against the then British government. Post independence people realized that these traditions were part of their culture and their identity and it was not a good thing to forget.

One such tradition being "Jallikattu" or eru thazhuvuthal or manju virattu practiced in the Indian state of Tamil Nadu as a part of Pongal celebration. It is a traditional sport in which a specific breed of bull is released into a crowd which tries to grab the hump of the bull with both arms and hands while the bull attempts to escape.  Jallikattu event symbolizes how ancient Tamils tamed the bull and introduced them to farming. There are evidences that Jallikattu has been practiced even before 400 BC. 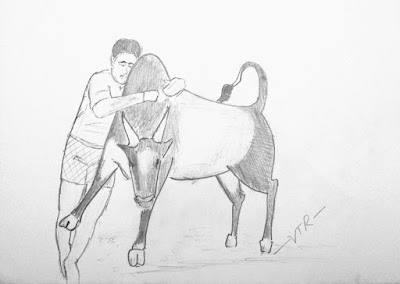 In 2014 the supreme court banned this sport in response to a petition from Peta and some animal welfare organizations that claimed it was cruelty to animals and a threat to public safety. Its important to note that bulls never get killed during the Jallikattu  but people participating do get hurt and killed. There has been a wider faction of people who consider that this tradition was in place to protect the indigenous breed and ensure the lineage of the Kangeyam bulls and that the effort of Peta is actually with ulterior motive of introducing western breeds.

People of Tamil Nadu united for this cause and protested in 2016 right after the Pongal being denied the celebration of Jallikattu. The protest continued for more than a week peacefully and finally TN government passed an ordinance that allows Jallikattu now. Even though the crowd of students without a leadership clashed with the police when asked to disperse after successfully achieving the intention of the protest.

There are many such traditions that have been in practice but now forgotten in the busy schedule of people.

When Google came into existence it sure did become an entry into the Webster dictionary (Google Meaning) but with the advent of Twitter its sure that it has kept the dictionary publishers with a lot new words and meanings. People who use Twitter (Tweeple) do have a lot more to add to the vocabulary. A tweetup is simply an in-person gathering organized via Twitter, often spontaneous. Companies use them for things like hosting launch parties, connecting with customers and introducing like-minded followers to each other. Tweeple - A person who uses twitter , has a twitter account, tweets regularly or all the people out there in Twitter. like in “Good Morning Tweeps(Tweeple) have a nice day” Twitizen – Just like a Citizen but the only difference here is that the country he belongs to is Twitter like in “An Average twitizen would know what a RT , DM , # means….” Twoob – A Twitter n00b Twacker – A computer programmer who is hacking twitter Twa
Read more